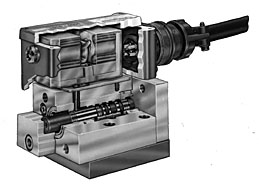 A servo valve that is simple, rugged in design and dependable in performance to give superior system control and long trouble free operation. 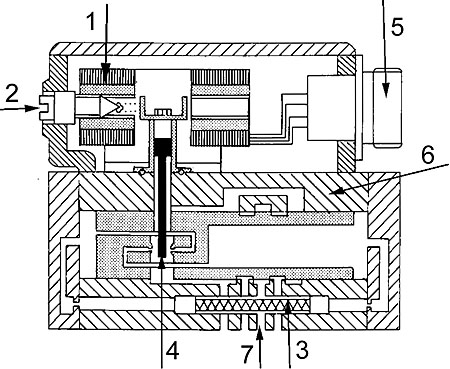 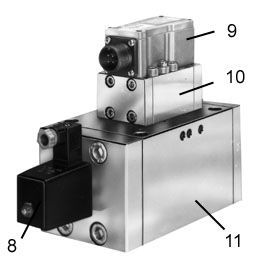 8. Selec servo valves can be driven by Selec ’s standard amplifier for superior performance, but they can also be driven by amplifiers manufactured by others.

Performance assurance is standard with every Selec component

The total dedication to performance is based upon experience gained since 1969 in matching fluid power equipment to a tremendous variety of machines and applications.

Selec’s Performance Assurance is made possible because of experience gained over the years in supplying machinery builders and users with unique solutions to thousands of unusual fluid power problems. Historically, Selec has concentrated its energies on hydraulics and electrohydraulic equipment and systems. 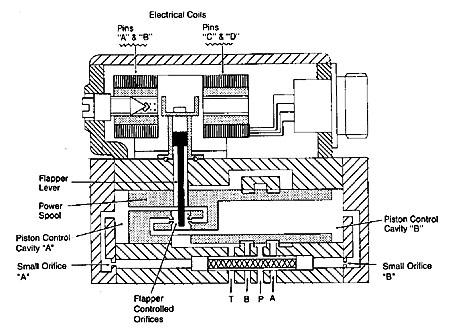 The primary stage of a two stage servo valve, shown in Figure “A”, is a current driven device. Current in the coils produce a magnetic field which deflects the flapper lever an amount proportional to the current level and in the direction consistent with the direction of current flow.

Although the power of the flapper lever is very small, the hydraulic force amplification generated on the piston control cavities “A” and “B” is enough to accurately position the power spool. 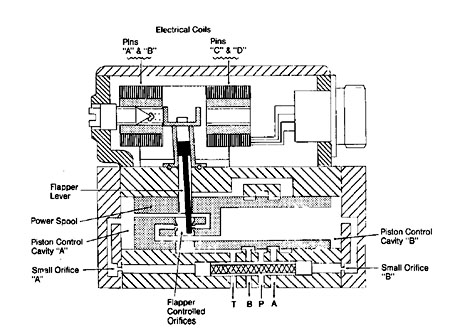 If a positive current flows from pin “A” and “C” to pin “B” and “D”, the flapper lever will move to the right as shown in Figure “B”. This movement of the flapper effectively throttles the nozzle on the right while de-throttling the nozzle on the left. The result is a pressure increase in cavity “A” which is supplied with fluid from the pressure port thru the small orifice “A”. At the same time, the pressure in cavity “B” decreases as it is opened to tank “T” (drain). 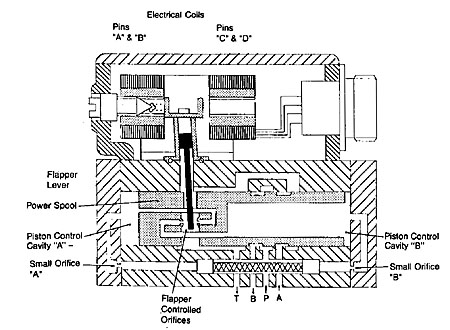 In the three-stage servo valve, the pilot valve is a standard VSC4-R03 two stage servo valve. This pilot valve directs fluid flow to position the third stage power spool. A Linear Variable Differential Transformer (LVDT) attached to the third stage generates an electrical feedback signal proportional to spool movement. The electronic package controlling the valve must supply the excitation for the LVDT as well as the signal conditioning circuitry for summing the feedback signal with the command. The standard Selec Amplifier Module provides all these functions.

When an error exists between the command signal and the conditioned LVDT feedback signal, the amplifier produces an output current to the two-stage pilot valve. This pilot valve in turn ports fluids to and from piston cavity areas “C” and “D” to shift the third stage spool. As the third stage spool moves, the LVDT feedback signal will change accordingly to cancel the command signal.

When the sum of the command voltage and the feedback volt is zero, the current output of the amplifier will also be zero. The result is the centering of the pilot valve. The pressure in piston control cavity “C” and “D” will be equal and the third stage spool will be at a new offset stable position.

If the error signal between the command and feedback signal was opposite in polarity, the valve would shift in the opposite direction. The polarity and amplitude of a command voltage determines the direction and magnitude of spool offset and flow. 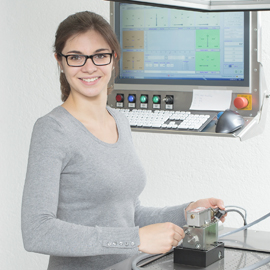 Looking for the valve-solution made for you?

Contact us. We develop, produce the unique hydraulic valve for your application. 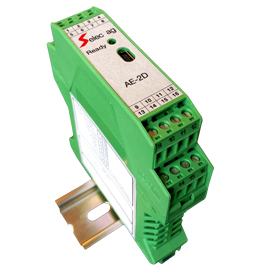